In the Lakota language, oko iyawapi means "week counts." In Lakota, Monday is Anpetu Tokahe (First Day) and Friday is Anpetu Zaptan (Day Five). The concepts of weeks and days of a week were unknown before non-Lakotas arrived in Lakota country. The naming convention for the days of a week appear to follow the Christian system wherein the world was created in six days and the seventh day God rested. Followers ever since are to set aside their work and attend church that seventh day. In Lakota, Sunday is Anpetu Wakan (Sacred Day). The Lakota week is seven days that begin on Monday and end on Sunday. This is the convention that is used for this oko iyawapi. 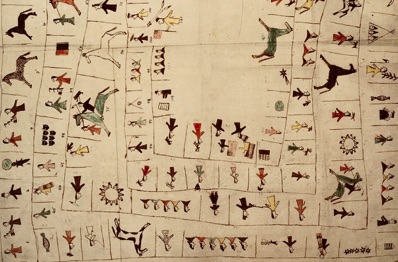 This oko iyawapi is organized around a photo taken each week at Wingsprings. The first one was for the week beginning Monday, February 23 through Sunday, March 1, 2009. Since that was the sixth year of construction at Wingsprings, the year was designated WS6. The Wingsprings year begins when the sun rises on the west-east axis from Bear In The Lodge Butte to the center of the Wingsprings hocoka, which we stipulate as occuring on February 28, New Years Day at Wingsprings.  The okos are numbered in Lakota words and Arabic numerals. So the first oko of each year is written "Oko Wanci" and "Oko 1."

This oko iyawapi is based on a traditional waniyetu iyawapi, or "winter counts," like the detail of one drawn by High Hawk shown above. But whereas Lakota winter counts were added to annually, this oko iyawapi is added to weekly. By clicking the image of the winter count you will be taken to the Wingsprings oko iyawapi Index pages. The okos are displayed on these pages with the most recent entries at the top. Click on the WS number to go to an oko. When on an oko entry page, scroll to the bottom to find navigation options, including "Index" to return to the index page. From the Index page, click the winter count image at the top to return to this page.